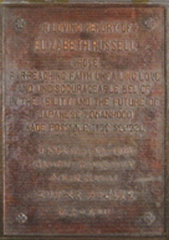 Kwassui Gakuin was founded by American missionary Ms. Elizabeth Russell in 1879. This plaque, which
can be found at the back of the Main Chapel on the Higashi Yamate campus, was gifted by the Alumnae
Association on the occasion of the 50th anniversary of Kwassui’s founding, and reads:
IN LOVING MEMORY OF ELIZABETH RUSSELL
WHOSE FAR-REACHING FAITH, UNFAILING LOVE, AND UNDISCOURAGEABLE BELIEF IN THE ABILITY AND
FUTURE OF JAPANESE WOMANHOOD MADE POSSIBLE THE SCHOOL

Nagasaki before and after the opening up of the port

The founding of Kwassui Girls’ School

The end of the war

Recovery after the war

The opening of the 4-year college

In 1991, with the Inauguration of the Graduate School,
Kwassui completed another step forward and became a
university. As new 4-year courses were opened, Junior
College departments gradually began to close, and the last Junior College graduation ceremony took place in 2005.